It’s Been nearly a year since I found myself in a slightly dilapidated German castle just outside Frankfurt, seeing Larian Studios’ Divine Divinity for the first time. My fellow journalists and I were shown round the game and then let loose to play through the first few parts. In the evening we drank beer from tankards and feasted upon roast potatoes and great lumps of pork skewered on daggers from a wooden plate. Not that all press trips are like this, of course. Sometimes they actually expect you to catch, kill and gut your own dinner first. Later we were entertained by keyboard stylings from a man with the most impressive mullet to ever grace a human head. It was a memorable trip. 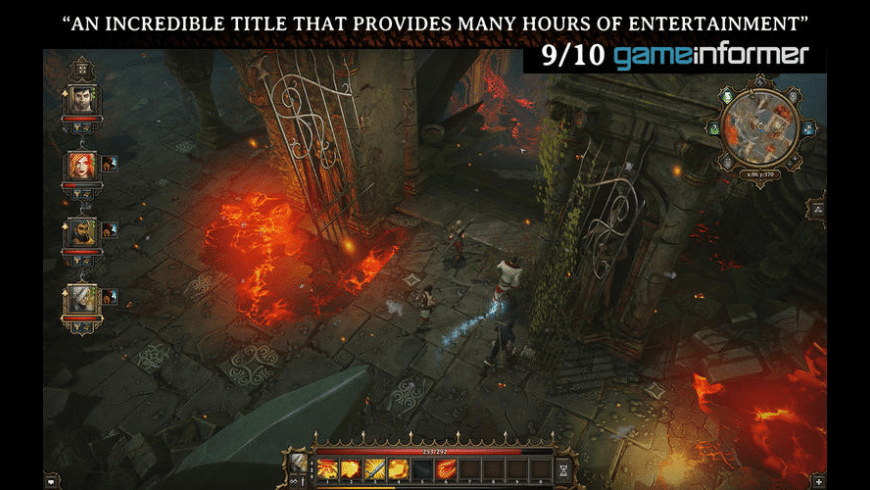 Since then, the tautologically named Divine Divinity took a sharp nosedive into the dark development oblivion where it was perpetually on the brink of 'almost’ being ready, and even I feared that I’d never get to find out what was on the other side of the bridge where the game’s hefty demo left off. But finally it's here and, damn, it’s been well worth the wait.

After Morrowind, Dungeon Siege Band Neverwinter Nights, it’s a bit of a to the system to see letric RPG again, ess of the recent of Icewind Dale II. dated visuals certainly Divine Divinity feel itically old skool. As expect, there's the idard type of role-ing set-up, with the iarray of character es, e.g. both male and rarriors, mages and survivors (a kind of thief/druid hybrid) and a familiar 'in times of f trouble a hero will arise' plotline. Nothing new here, you might be thinking, and to a I certain degree you’d be right because Divine Divinity is very much an amalgamation of many different RPGs. The strong storyline and multiple subquests are akin to Baldur's Gate II, the sheer depth of interaction smacks of the Ultima series, the frantic combat is reminiscent of Diablo II and the sheer vastness of the world makes it feel like an isometric Morrowind. 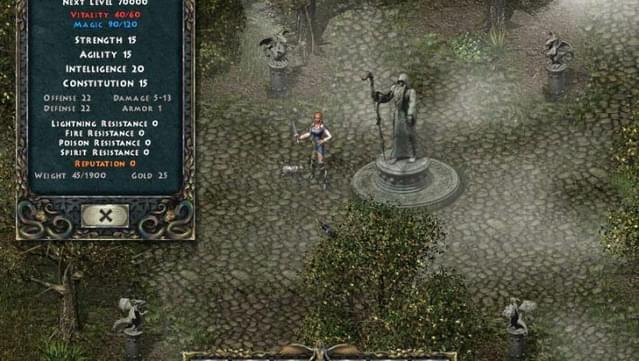 It all starts in a village populated by a small community of healers, one of which has found you unconscious in the woods after you’ve had a rather intimate experience with a strange column of light. As those of you who’ve played the demo will know, there are a few basic quests in the village and a large subterranean level to complete before you’re allowed to go marauding through the countryside.With 3D taking the RPG world by storm, isometric games like this are bound to be seen as a little unsexy. But this is usually a view held by people who value graphics over gameplay and style over substance. For many of you out there, the Baldur's Gate games will be the pinnacle of your isometric role-playing experience. Don’t get me wrong, I loved them too. But whereas BG and BGII gave you solid vanilla-style luvin’, Div Div gives you much more diversity. Graphically, it looks pretty good, at least for an isometric RPG, and even though you can run the game in three different resolutions, including 1024x768, you'll probably end up running it on the medium setting (800x600) just so you can see the small objects more clearly. 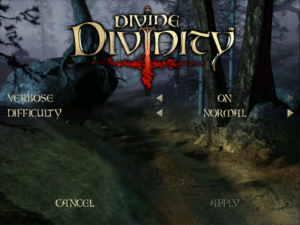 And detail is something Div Div thrives on. As soon as you step outside the front door, you’re hit by it. Birds and butterflies flit above your head; rabbits (which are also handy for building up your experience points early on, as well as providing a tasty snack) scamper through the grass. Herbs can be used to make potions, everyday implements like brooms and rakes can be used as weapons, candles can be lit and snuffed out again. Practically anything that’s not nailed down can be manipulated in some way.

It’s not just graphically where Larian Studios have added lots of detail. Little things, such as different sounds for running over stone, water, mud, grass and wood for example, even the sound of birds or night creatures as the 24-hour day/night cycle runs its course, creating a superb atmosphere. As for the music (which you have the aforementioned amazing mullet man to thank for), never before in an isometric RPG has the score been so atmospheric that it’s raised my blood-pressure to dangerously high levels.

OK, so I mentioned the Morrowind comparison, and it's not an obvious connection I know, but let me explain. In the Baldur's Gate games, moving from one area to the next involved plenty of loading, but in Div Div you walk pretty much everywhere seamlessly, unless blocked by the landscape. There are a few tricks built in to help you move around a bit quicker, such as a pair of small teleportation pyramids - one of which you drop and one you keep in your inventory - that allow you to transport yourself quickly between two locations. There are also transportation portals scattered around the land, which you can activate when you've found the right scroll.

In my time spent playing Div Div, I found only one edge to the map. I wandered through countryside, farmlands, market places, caves and castles etc, picking up quest after quest, and if it wasn't for the automatically updating diary and huge world map, I would have got that same 'I have no bloody idea where I am or what I’m doing’ feeling that I got when playing through Morrowind.

The Way And The Light

Each of Div Div's six possible characters, as well as having their own initial class-based skill (sneak, whirlwind attack and swap location), also has a tailored set of skills known as The Way of the Warrior, The Way of the Mage and The Way of the Survivor. Each of these is broken down into four different trees in a similar way to Diablo II. For example, the warrior has one set of skills devoted to weapon mastery, one to ranger skills, one to warrior’s lore (which revolves around your innate damage and defence abilities) and a fourth tree devoted to more magical skills such as boomerang weapons and feigning death.

Although your chosen character will be able to access the various passive, offensive and defensive skills which they specialise in the quickest, they will also be able to take on some of the skills and spells from the other two paths, although somewhat more slowly. This basically means the list of possible character profiles is virtually endless, as you can mix and match a host of skills from different skill trees.One of the areas I was worried about Div Div falling down on was the general script and voice-overs. And although the voices of the main characters have a rather annoying American twang to them, the narrative - both written and spoken - is thankfully very good. In fact, if you thought that the storyline in Neverwinter Nights was less hardcore than the normal Bioware fare, then you might well find just what you're looking for in Div Div. There are also some nice little touches throughout the game, such as two resurrected skeletons musing about why exactly they can move and talk without muscles or vocal cords, which eventually leads them to fall apart through excess existential thought. It may not be high comedy, but it certainly raises a smile, which is rare in the slightly sombre, serious world of role-playing.

The quest structure is very much like a cross between Baldur's Gate II and Morrowind. There’s a vast number of sub-quests and inter-connected plot strands revolving around your destiny and the general malaise sweeping the land. Along with that, there are the everyday problems of the locals, such as cattle rustling, demonic possession and suspicious men wandering around in big hats. Many of the game’s quests are connected and actually require you to pay attention, rather than just being a simple case of 'go here, pick up this, take it to somewhere else’ etc. The game is also littered with manuscripts, letters and books, which can hold vital clues for your quest, information on the land, helpful advice, or similar scribbled rantings... or maybe just someone's family recipe for apple crumble.

While you can find many of the elements of Divine Divinity in other RPGs. it’s rare to find one that combines them as successfully and surprisingly as this one does. Although it has to be said that the person responsible for naming the game should definitely be led gently aside and told that no self-respecting grown-up should be titling games with words they like the sound of. regardless of their actual meaning.

It seems the future of roleplaying games will inevitably move towards the Morrowinds and Neverwinter Nights of this world, but Div Div is living proof that, when tailored by the right hands, isometnc RPGs can still be as captivating and challenging as their 3D counterparts.

It was long on the wishlist, but now it has been taken care of: Divine Divinity for the Mac! A great RPG classic can now be played on Mac. The game works great on Catalina and Big Sur 10.16.x as well :) have fun!

We always recommend having besides Porting Kit also Crossover as alternative. Crossover is more advanced, supports DX11 and has phone support other features. Crossover makes Porting Kit possible and when purchasing Crossover using the links here you support us with out work with Porting Kit.

Basic Portingkit Install Instructions GOG games:
1. Download Portingkit if you don’t have it already!
2. Download the Divine Divinity “offline backup setup” file(s) into your (root) download folder.
3. Go to the library server tab and select the game you want to install and click “Install”
4. Portingkit will create the wrapper and locate your setup file in your download folder
5. The installation of the game will start, run through the install wizard.
6. After installation, exit the installer (don’t run launch the game).
7. Porting kit will say it has finished successfully.
8. Go to your local library tab and select the game and click “play”!
9. Enjoy the game!

Game description:
Divine Divinity is a role-playing game featuring a gameplay experience somewhere between Sacred and the Ultima series. You can choose from 3 typical character archetypes – Fighter, Mage and Survivor (Rogue-like class). Each one has a unique special skill. The rest of your character development its up to you imagination – you can even learn skills from other classes and make a very unique character build.

Go to the Porting Kit game page up here…

Love the work we do? Become a Patron… and get extra Tiers!