Here is a complete list of all the keyboard shortcuts that can be used while playing Red Alert.

TEAMS [CTRL + #, #, ALT + #]
As you've learned, you can select more than one unit at a time by leftclicking on an empty space and dragging a box to select all of theunits that you want to move at once. What if you want to select thatparticular team again in the middle of battle? Normally you'd have toband-box them all over again. This may mean scrolling the screen aswell, since most of the time you are trying to do more than one thingat a time.
You can 'Save' all of the units into a team. To do this, first selectall the units that you want in your team, then hold down the CTRL key,and hit any one of the number keys on your keyboard (1-4). This willmake all the selected units part of that team. To instantly select thatteam just hit the number key corresponding with that team, and theywill all be selected.
Note that this will not re-center your view on that team, it willselect them so you can give them orders. If you want to see that group,hold down the SHIFT key and individually click on the units that youwant to add to that team (sorry, you can't band-box with this method).Once you've got them highlighted, resave the team again by holding downCTRL and hitting the number of the team. That's it!

BOOKMARKS [F9-F12, CTRL + F9-F12]
You can save 4 positions of the screen and return to them at any time.To save a position, hold down the CTRL key, and hit one of the functionkeys F9-F12. You can then just hit the F9-F12 keys to jump to thatlocation on the battlefield. 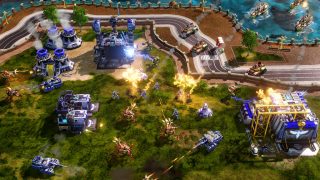 FORMATIONS ['F' KEY]
Once you have created a team, you can make that team follow formationorders. Simply hit the # key that corresponds to the teams you havecreated, then hit the 'F' key. A small F will appear next to the teamnumber.
Units in formation will try to maintain their order as you had themwhen you made the formation, and will move at the speed of the slowestunit. This is good for keeping rocket launching units behind tanks, orother lighter units behind the heavier armored ones.
To undo a formation, simply select the group that is in formation, andhit the 'F' key again.

GUARD MODE ['G' KEY]
Normally, units that you have stationed around the battle field willonly respond if they're fired upon, or an enemy units gets close enoughto be fired on. However, they won't go looking for trouble – they'llonly get involved in someone else starts it.
If you want your units to pick fights with anyone that comes withinrange, select the units and hit the 'G' key on the keyboard. This willput all the selected units into Guard Mode. With this on, your unitswill be much more aggressive, moving towards any threats that come nearthem.
Guard Mode will continue to function on those units until you movethem, give them another order, such as stop or scatter.
Giving Guard orders to aircraft or helicopters will cause them to stoptheir attack and return to their airfield or helipad.

FORCE FIRE [CTRL + 'L' CLICK]
Sometimes, you may want to have certain unit's fire on a building orarea even if it isn't an enemy target. To get them to do this, you canuse Force Fire command. Simply select the units that you want to dothis, hold the CTRL key, and click on the location that you want theunits to attack. The icon will be a targeting cursor as long as youhold down the CTRL key.
Units in this mode will continue to fire on that area, ignoring allother threats, until you tell them to stop, or give them a new order tofollow. Some units cannot be forced to fire at something, like anEngineer or Medic.

FORCE MOVE [ALT + 'L' CLICK]
Infantry annoying your tanks? Squish 'em. Using the Force Move command,you can make your tanks (or any heavy unit) move into an enemy occupiedarea and attempt to overrun the infantry in the square. To do this,select the units(s) to Force Move, then hold down the ALT key andleft-clicking on the area you want to Force Move to. You can also usethis to single-out a particular infantry unit that is giving you a hardtime. Your unit will attempt to crush that infantry unit either itsucceeds, you give it a new order, or your unit is destroyed.
Vehicles cannot overrun each other, and infantry cannot overrun tanks.Only tracked or heavy units can Force Move into enemy infantry. Youcannot force your tanks to crush your own infantry.

SCATTER ['X' KEY]
Tanks trying to squish your infantry? Planes coming in with Parabombs?With Scatter, you can make your troops move in a random direction fromtheir current location, allowing them to (most of the time) dodge outof harms way.
To Scatter units, select them and hit the 'X' key. Units that arescattering will continue to carry out any attack orders, so you canselect them, tell them to attack, then hit 'X' key to make them Scatterfrom the threat.
Note, scattering units will only make all the selected units to moveonce. If you want them to continually Scatter, you must keep the unitsselected, and continue to hit 'X' key every second and or so.Otherwise, they will Scatter once, then stop, continuing to attack thetarget you've given them. Also, units that are scattering may Scatterout of their range. If this happens, left-clicking on the target again(with the units still selected), and your units will move back intofiring range.

STOP ['S' KEY]
If a unit is marching to certain death, or has been given an order thatyou don't want them to continue to do, you can force that unit (orstructure if it's a turret of any kind) to Stop firing, moving ormining. Select the unit(s) that you want to Stop, and hit the 'S' key.

ESCORT [CTRL + ALT + 'L' CLICK]
Sometimes, you may want units to defend another as it moves around thebattlefield. This can be good for protecting an Ore Truck or any othercritical unit as it moves about. To follow a unit, select the unit(s)that are going to be the 'Tailing', and hold down the CTRL and ALTkeys. While these are still held down, you will see the cursor haschanged to gold movement cursor. Click on the unit that you want toFollowed, and they will automatically go after it, following itwhenever it goes.
Note, having large groups of units following another unit can becounter-productive. Don't have a large group of unit follow your OreTruck, or it may hinder the Ore Truck's movement, slow down yourcollection of Ore. If enough units are following, they may surroundtheir target, and it will not able to move all.
Aircraft, helicopters, and units without weapons (like medic andengineers) will not follow either.

CENTRE VIEW [HOME KEY]
Hitting the home key will center your view on the currently selectedunit/structure.

CONSTRUCTION YARD VIEW ['H' KEY]
Hitting 'H' will instantly center your view on your Construction Yard.This is useful for jumping back to your base when you've beenconcentrating your efforts somewhere else on the battlefield.

EVERTHING SELECT ['E' KEY]
Hitting 'E' will select unit that you can see on the battlefield. Thisis useful for putting your entire base into guard mode, or making a madcharge on the opponent's base with everything that you can see.

NEXT UNIT ['N' KEY]
This key will select another unit in your army. You can cycle throughall your available units with this key.

ALLY ['A' KEY] - MULTIPLAYER ONLY!
During multiplayer games, it is sometimes advantages to ally with otherplayers. To Ally with a player select one of that player's units, andhit the 'A' Key. A message will tell everyone that you have allied withthe other player. Allies can share Service Depots, Helipads, etc., andwill not attack each other automatically. You will also see all of yourAlly's units on the radar map, and his units will reveal the areas ofthe battle for you that you did not have uncovered.
Making alliances are only ONE-WAY. If the other player does Ally withyou, their units will still attack yours, but yours will not attackback. It is good idea to make sure the other player wants to Ally withyou before commit to the alliance.
To break on alliance, select one of your Ally's units, and hit the 'A'key again. Unlike making an alliance, breaking an alliance breaks itfor both players. Both sides' units will become hostile to each otherimmediately.

MESSAGE SYSTEM [F1 – F8] - MULTIPLAYER ONLY!
To send messages to the other players in a multiplay game, hittingF1-F7 will prompt you to enter a message to a specific player. F8 willsend your message to everyone currently playing.
You can determine who each key represents by locking at the scorescreen in the map display. The players are listed in order (top tobottom), excluding yourself.
Note that when you are entering a Message, none of the keyboardcommands will function. If you wish to abort the Message, hit the ESCkey.

WAYPIONTS ['Q' KEY]
This is the intended way to use Q, but was never completelyimplemented. Select a group of units and press and hold Q, then tellthem to move somewhere in a corner of the map for instance. Now keeppressing Q and tell them to move to another corner of the map. Theunits will first carry out their original order before moving to thesecond corner. Great for sneak attacks from behind. However, this onlyseems to work with ground units.

To extract, please use The Unarchiver
——————
– Mount the *main* .dmg
– Install the game to your ‘Applications’ Directory if you don’t know what you’re doing and want things to just work automatically. 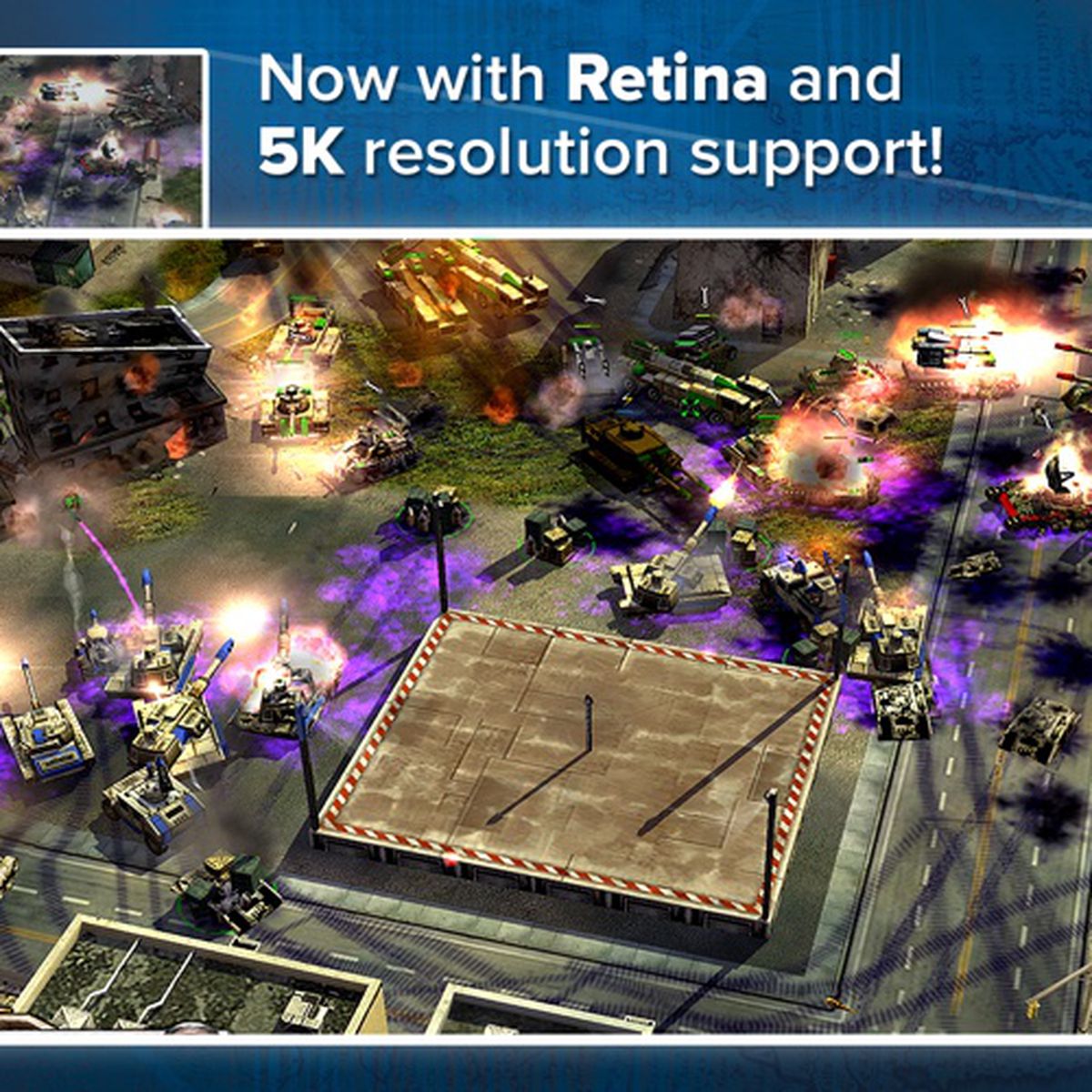